Female students made to remove bra in exam centre due to security check...

Authorities in the southern Indian state of Kerala Monday ordered a probe into allegations that an 18-year-old student was forced to remove her bra at an exam centre as part of stringent measures to stop cheating in a national-level medical entrance examination. 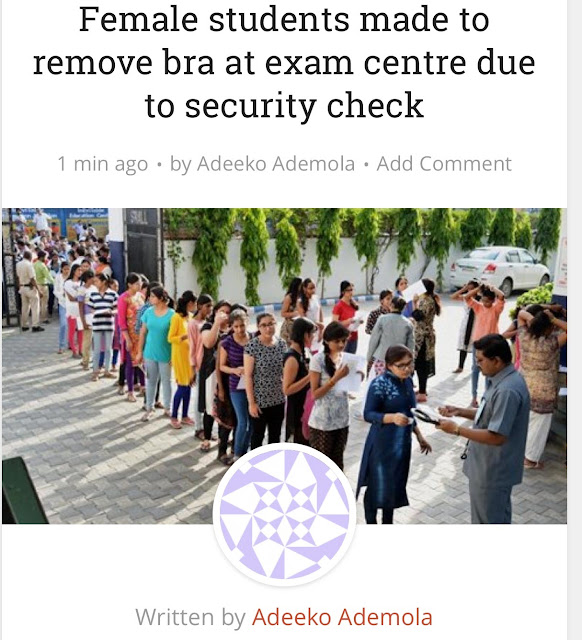 The alleged incident took place at TISK English Medium School in the state’s Kannur district on Sunday, when hundreds of students went for the National Eligibility and Entrance Test, NEET, seeking admissions to undergraduate medical courses across the country.

“My daughter went inside the centre only to return a few minutes later to hand over her bra.
“As she entered the centre, the metal detector at the gate beeped due to the metal strap of the bra. She was told to remove the innerwear for security, to prevent cheating,” her mother told the media.
“Many others were forced to undergo the same ordeal,” she added.
Kannur’s District Collector, M.M. Ali, said that he would look into the allegations. “I have heard about the allegations.
“We will look into the matter,” he said.
The State Human Rights Commission has condemned the incident and also sought a report from the district authorities.

“We have asked the authorities there to submit a report into the serious allegations,” commission member J. Premeela Devi told the media.

However, the principal of the school, where the examination was held in the district, Jalaluddin K. said: “We have clear instructions that if the metal detector beeps, no one can be allowed inside.
“Whenever it beeped, we told students to remove what they have.”