10 years old child assaulted with Hot Iron by his aunty.

A 10-year-old boy, Fawaz, who was accused of stealing was reportedly brutalised by her Mum's sister, Mama Arafa, who used a hot iron on him. According to the lady who shared the story, the boy's aunt lives in Naibawa, Kano. 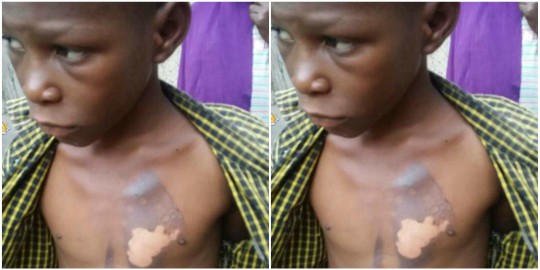 "Another child abuse in kano today!

Rukayya or Mama Arafa brought her nephew from a village in Osun state , no school no enjoyment and no rest of mind for Fawaz, a 10 years old boy. This is another recent act of her inhumanity, Mama Arafa pressed a hot iron on Fawaz's chest over an allegation of thefy.

She lives in Naibawa, kano. Can someone arrange for her arrest but no violence. The boy would sometimes sleep outside which puts him at risk of all forms of abuse particularly sexual abuse."