Pro-Biafra agitator and leader of Indigenous People of Biafra (IPOB) Nnamdi Kanu has been freed from Kuje prison after meeting his bail conditions on Friday, April 28. 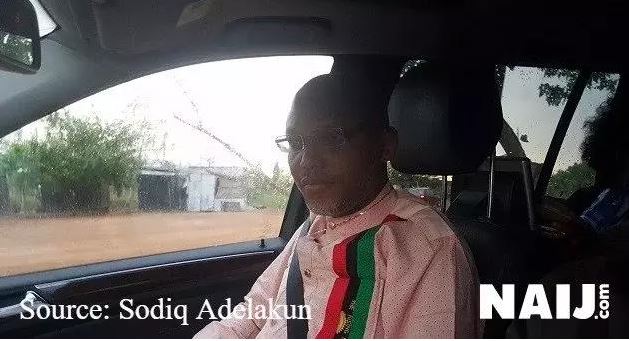 He was driven out of the detention facility by former transportation minister Osita Chidoka.

It was earlier reported that a Federal High Court judge had signed the bail papers for the leader of the Indigenous People Of Biafra (IPOB), Nnamdi Kanu.


According to Naij, Justice Nyako signed the papers on Friday afternoon, April 28, after all the conditions given to the IPOB leader for his bail was met.


Three sureties including a Jewish Rabbi and Senator Enyinnaya Abaraibe, vouched to stand in and ensure the IPOB appears for trial at all times. There were unusual tension and security presence at Kuje prison as Nnamdi Kanu was released today after almost two years in detention.

Several security operatives from the military, prison and some on plain clothes were seen littered around the prison facility. Deputy senate president Ike Ekweremadu earlier today joined the Port Harcourt Jewish Rabbi to perfect the bail condition of the leader of the Indigenous People of Biafra (IPOB), Nnamdi Kanu.

The senators had followed the process of perfecting Kanu's bail from the onset. The court had earlier ordered that three sureties, including a serving senator and a Jewish religious leader, will provide N100 million and a landed property in Abuja.