Mel B. claims estranged husband Stephen Belafonte was a monster, brutally beating her, extorting her into doing 3-ways with other women and threatening to release sex tapes ... and now she says she and her children fear for their lives. 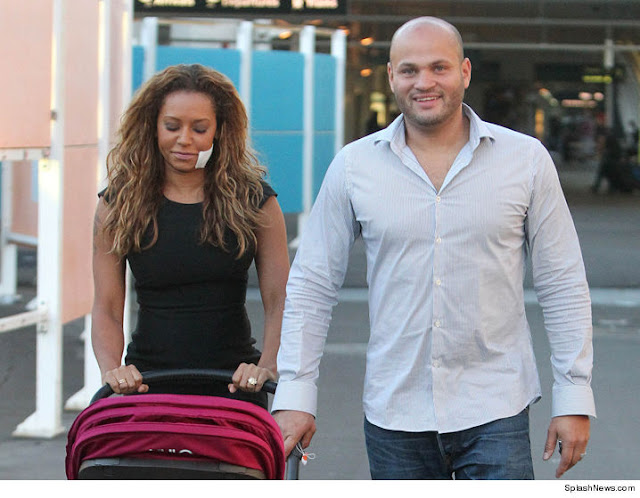 Mel B's lawyers got a restraining order Monday, forcing Belafonte to stay away from Mel and her 3 kids and ordering him to leave the family home.

In her declaration, Mel B tells a horrific story of abuse.

Here are some of her allegations:

-- November 2007, the night of her "Dancing with the Stars" finale, as she was getting ready at home, she says Stephen placed both of his hands around her neck, began choking her and slammed her down onto the hardwood floors. She says this was the pattern ... when she achieved any measure of success, he would "beat me down to let me know he was in charge."
-- July 2012, while she was taping 'X Factor,' she was going to tape a segment with Usher, and Belafonte flew into a jealous rage, punched her with a closed fist in the face, splitting her lip. When she asked how she was supposed to work with the injury, he said she should have thought of that before deciding to "flirt with and f*** Usher."
-- August 2012, the day after performing at the closing ceremonies for the London Olympics, he punched her with a closed fist and pushed her down on the carpet. Her skin was burned from being pushed against the carpet and her face "actually scabbed over the rug burns." He then forced her to tweet out she injured herself by running on 7" Christian Louboutin heels.
-- Mel B claims Stephen got their nanny pregnant. She says he told her he wanted to have the baby and "all three of us live together." She says Stephen ultimately demanded the nanny get an abortion. She also says Stephen paid the nanny in excess of $300,000 of Mel B's money "for alleged nanny services."
-- She also says in 2014, she was overcome with "emotional and physical exhaustion" and took an entire bottle of Aspirin. She tried calling 999 and he blocked her, throwing her in the bedroom, locking the door and "telling me to 'die, bitch!'"
-- She says Stephen has sex tapes of her and repeatedly threatened to release them to ruin her career.
-- And, she says, he forced her to "participate in sexual intercourse with him and random women" and he would often secretly record the encounters. She says when she tried to resist the 3-ways, he'd threaten to release the sex tapes.
-- Mel B says she tried to leave him many times, but he "threatened me with violence and threatened to destroy my life in every possible way ... destroy my career and take my kids from me."
-- Mel B says Stephen has a gun at home ... a violation of law since he's prohibited from carrying firearms as part of a domestic violence conviction involving another woman. She says the gun is either a .38 or .357 magnum.
TMZ broke the story ... agents from the Dept. of Alcohol, Tobacco and Firearms served a search warrant on Belafonte Friday night after his brother made claims Stephen had the gun. Mel claims Stephen kept the gun in a lockbox in the bedroom closet. She says ATF agents did not find the gun.
In addition to getting the restraining order, the judge ordered Stephen to leave the family home in the Hollywood Hills. He went to the house late Monday afternoon, packed up some of his stuff, and told our photog the allegations were untrue.
Posted by cocowondersblog.com on April 04, 2017