30 Yahoo Boys Arrested in Ghana! 29 Of Them Are Nigerians...

30 suspected yahoo boys have been apprehended by the Achimota Mile 7 Police in Accra and 29 of them are Nigerians. 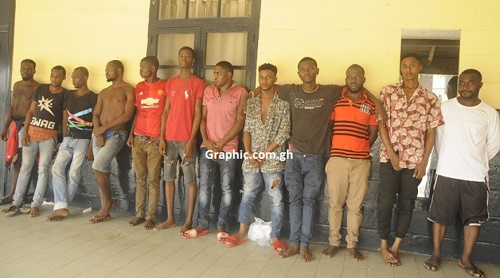 The Ghanaian police made the arrest in an early morning swoop on a house at Alhaji Tabora Str in Accra.

Gadgets retrieved from the suspects were 34 laptops and 48 mobile phones they allegedly used in committing crimes Graphic.com.gh reports.

The suspects are also linked to a dead body that was found wrapped at the Apenkwa neighbourhood two weeks ago.

The suspects are aged from 21 to 30. Another suspect, Peter Konadu Frimpong, 34, who was on top of a storey building videoing the police action, was also arrested. The suspects Among the suspects rounded up were Ike Ogu, 24; Ike Iduozi, 23; Blessing Adebayo, 25.

He said the police met almost all the suspects busily engaged in fraudulent cyber activities during the swoop around 7 a.m. “The suspects were all living in one big house where they undertake their nefarious activities,” he added.