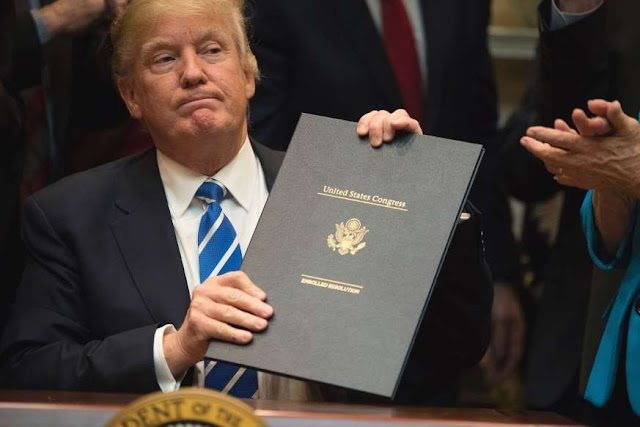 Promising to "remove every job-killing regulation we can find," Trump said even more regulation-cutting bills were on the way. 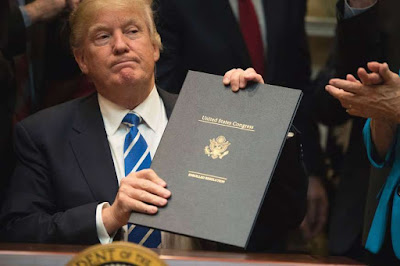 The resolutions of disapproval reached the president's desk through the Congressional Review Act, a rarely used tool that allows Congress to fast-track a bills to reverse regulations. Before Trump, the law had been used successfully only once in its 21-year history.


Trump has now signed a total of seven, a pace that has surprised even experts. "There are several that weren't on my radar at all," said Susan Dudley, director of the Regulatory Studies Center at George Washington University.
In fact, now half of all bills Trump has signed so far have been these regulation-killing resolutions. White House press secretary Sean Spicer said Monday many of the bills "cancel federal power grabs that took decision-making away from the states and local governments."

The "Fair Pay and Safe Workplaces" rule, which barred companies from receiving federal contracts if they had a history of violating wage, labor or workplace safety laws. That regulation, derided by critics as the "blacklisting" rule, was already held up in court.
"The rule simply made it too easy for trial lawyers to go after American companies and American workers who contract with the federal government," White House press secretary Sean Spicer said.
President Obama had pushed the rule through an executive order in 2014. But with the rule wiped off the books, Trump then signed an executive order revoking Obama's order and directing agencies to rescind any policies implementing it.
A Bureau of Land Management rule known as "Planning 2.0," that gave the federal government a bigger role in land use decisions.

The rule was opposed by the energy industry.

Two regulations on measuring school performance and teacher training under the Every Student Succeeds Act, a law Obama signed in 2015 with bipartisan support.
Trump's action effectively precludes federal action on any of those rules, since the administration is now barred from issuing any new rule that is "substantially similar" to the ones that were just overturned.

That's one reason Congress has used the Congressional Review Act so sparingly in the past. Dudley said this Congress clearly has an appetite to cut even some more obscure regulations. "If there's a really focused group that is interested in this regulation and doesn’t like it, Congress might take it up," she said.

The rules canceled by Trump's pen include:
Trump signed the bills in a ceremony in the Roosevelt Room of the White House, handing out pens to members of Congress.

"This was a lot of work by a lot of people to get this done," he said. "It will lead to a lot more jobs for a lot more people."

dailymail.co.uk
Posted by cocowondersblog.com on March 28, 2017