Tonto Dikeh's Husband Olakunle Churchill Finally Speaks... "Those are lies. I have the receipts of everything I bought for her. I always try to stop her from displaying the gifts.

This is a transcribed interview of Nollywood actor Tonto Dikeh's estranged Hubby Churchill Olakunle where he tore down her own interview accusing him of Domestic Violence and others. 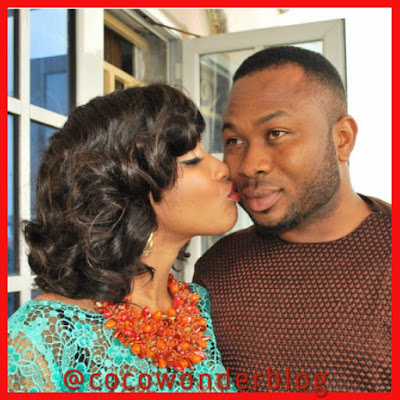 I will also address the part that he indirectly referred to me with the Rumor has it part.
( Article referring to to SDK)

He was asked by the Interviewer how he met Tonto Dike, he responded with "you mean my wife?"


He revealed that he met Tonto at his brother's birthday party that held at Escape nightclub. "We exchanged contacts and got talking. She got pregnant after six months". He denied Tonto's claims that she watched him make every dime he has. "I met her two years, six months ago and I have been into real estate since I was 23".

About the Ghana incident, he said "I picked her from the airport on June 8, 2015. We had a misunderstanding and she had to check into a hotel instead. She came home the next next day around 3 or 4. I was not even around and I sent her a text that I was going to a friend's house warming party. She started breaking things. Luckily for me, I switched off the electric fence wire before leaving the house. She tore down the fence, jumped into my compound and broke everything. When I got home, everything was upside down. I called the police patrol. My neighbours already called the police too. You know Ghana is a calm country and the area where I stay is called Trassaco, just like Banana Island. I called the Police on my way home. The closest police station is Medina police station. Before the police got there, she was already attacking people. There's this thing about my wife, it is like a crisis. It doesn't stop for close to 2-2 and half hours. I'm sorry but I just had to say it.

When asked what he meant by crisis, he explained that "she's too temperamental due to her "negative intakes" like alcohol abuse, marijuana. She's always uncontrollable. At the long run, we went to the police station. When her anger starts, SIX men can't hold Tonto down talk less of me hitting her. She destroyed everything I had to zero. She even spat on one of the police officers. When the incident happened, I covered up the whole thing. I took the phones of everyone that was there and deleted all pictures. I closed everywhere just to cover up the incident".


On her accusation of DV and running to the embassy stark naked, he said "Nothing like that happened. I read that some people said I sponsored the statement released by the Ghanaian police. I don't think the man in charge would want to put his job on the line by doing such. Whenever Tonto is in that state, it's like she's in another world. SIX men can't hold her. It is due to her negative intakes. Ghanaian police cannot be bribed. She was locked up and was still stubborn while in the cell. When i got her released from the cell, she said that if I forgive her for this, that means I am an angel. She promised not to go back to alcohol and marijuana intake again. I changed her for good".

"Just three weeks after the incident, she took in. She was sober throughout the duration of her pregnancy and she came back from the US. Four months after the birth of King, she started again. So far, she has damaged N66million worth of properties. I tried so hard to change her back to the person she was during her pregnancy. I have evidences of the properties she damaged. I have someone that monitors Tonto and gives me updates about everything she does, like trying to blackmail me."

On the claim by Tonto that he hit their son (King), he responded "how can I hit King? that's not possible. What can a boy that wasn't up to a year old do to me that would make me hit him? He can't even talk. A day before his birthday, I was still looking for him and his mother. I called the nanny and unfortunately, she wasn't in the house with Tonto at that moment".

He then played a recorded call with the nanny where he accused her of conniving with Tonto to deprive him access to his son. In the conversation, the nanny was short of words. He said "you be person grandma, why you go dey do this kind thing. If she don tire for marriage, make she no dey give excuses. Tomorrow na my son birthday and I wan see am". He asked her to give the phone to King and the child cried. The nanny said "as he hear your voice, he dey look around".

"I got him a GMC for his birthday. I thought I was going to see him but all efforts proved abortive. I am not a social media kind of person but I was forced to create a post as I was told my wife could only be found on social media".

About the pictures of scars on Tonto's body, he said "The only scar I know about is the one on her leg. She happened to be breaking things again at my mum's house and was coming towards me. Her male best friend was trying to hold her back. The guy was actually crying because he had not seen that part of her before. She broke the TV, kitchen utensils, the dispenser. She got that scar when she slipped on the stairs. Any scar apart from that, It's not real".

He played a video recording of the alleged incident at his mother's house and there were broken stuff everywhere. He was heard saying "mummy, e ma binu (mum, don't be angry) and his mother responded "mi o binu (I am not angry), emi ti e ni mo ti e n ro bayi (I am worried about your own life). Olorun ma je ki a foju sukun omo (May i not mourn over my child).

He continued "I am a philanthropist. I have never raised my hand on any woman".

On Tonto's claims that she lost a 4 month old pregnancy due to the DV, "There was nothing like that. She was pregnant and travelled out of the country. She just stopped breastfeeding like 3 weeks ago. How's that possible? This is a woman that told me that she would do everything to bring me down. I have someone in her camp that tells me everything even up to how she made the scars on her body up. She called someone to do that for her. The only scar I know about was the cut she had on the glass by the staircase. She wants to bring me down. I am not a woman beater.

She has everything planned out. I am not an actor, I cannot cry. 95% of her claims during the interview are lies. The only truth is the "I love my husband" part. About the STDs, that's not possible at this stage of my life. STDs in this millennium? I don't know what she wants. I was not even around when she moved. She packed everything in the house with two trucks yet she claimed she left with nothing. I don't know where she stays till date.

Our families tried to reconcile us 9 times. The 9th time was about 10days ago. After the meetings, she pretends like we are cool and as soon as the families leave, she blocks my number. I do not know what she wants. 10 days ago, I invited her dad and some chiefs from her village (he proceeds to show pictures from the meeting which had Tonto beaming with smiles while carrying their son, flanked by her father and the chiefs and Churchill).

About Rosaline Meurer and the alleged trips, "I had a summit in Switzerland in which I got all my staff visas. They are 22 in number and they were all in attendance. If there's any picture I took with Rosaline, it is a group picture. If Tonto has implicating pictures, let her present them. My wife cannot tell me she doesn't know Rosaline. She knows all my staff. My wife has a blogger friend that uses "Rumour has it". I think when she started all her works against me, she used her against me".

On the accusation that Tonto fought with his mum, "She has fought with my mum before. It's the incident I told you about earlier. When Tonto starts, she's like 6 in 1, like a demon. You cannot hold her. She strips me during fights. My mum intervened during that incident and Tonto elbowed her and she fell. She even hit my brother. Her best friend was just crying".

About his first marriage and the different children from different mothers, "When we first met and Tonto was on about Mr. X on her social media page, someone attacked her in the comment section, calling her a husband snatcher and all. It went viral. How come she doesn't know I was married before? I went to pay her dowry 7moths later. It was everywhere that Tonto's Mr. X was a married man so how come she wasn't aware? Anyine that has a child for me should come out clean on social media. I am an educated person and wont engage in having kids everywhere. I will be happy to train my children if it is true but it is all lies. Why are they calling Tonto and not my mum?

About the GMC being a hoax and all the gifts displayed being bought by her "Those are lies. I have the receipts of everything I bought for her. I always try to stop her from displaying the gifts. Even the Rolex Watch, I bought it. I actually bought the GMC for my son (plays a recording of him driving the car). It is real. I bought it for him but I was unable to see him. You won't find anything about me online because I do not like social media.

About reconciliation, "She blocks me after every reconciliation attempt. I don't think she's ready to reconcile with me. I still have her pictures on my instagram page. I am against DV. I have never and will never raise my hands on any woman. I am here to clear my name and the name of my company.

On the Prado car Tonto claimed she sold "I still have the original documents of the car and it is still registered under Big Church Haven company. There is no indication that the car has been sold. Thank you"