We woke up yesterday to a post made by Kemi Olunloyo that she just got arrested by the Nigerian Police Force..
well- Updates 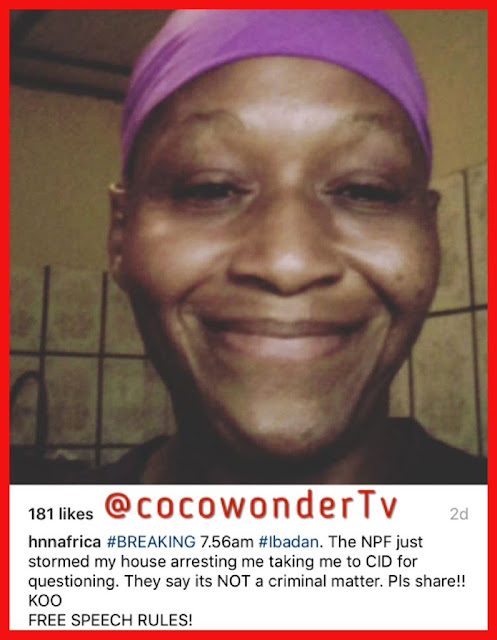 7.56am #Ibadan. The NPF just stormed my house arresting me taking me to CID for questioning. They say its NOT a criminal matter. Pls share!! KOO


Well, Kemi Olunloyo just updated us as she got some moments with her phone. She's tell everyone why she was arrested on others of  Pastor David Ibiyeomie ... 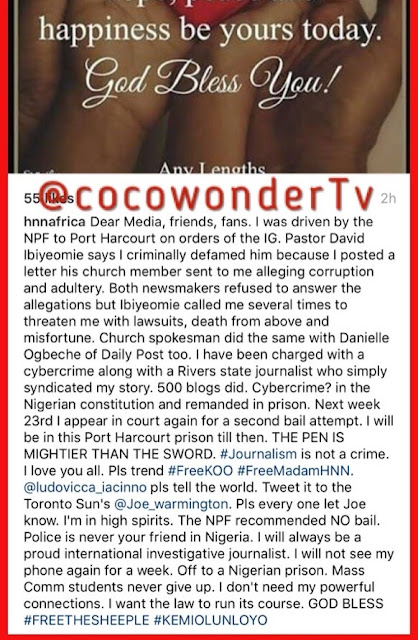 Dear Media, friends, fans. I was driven by the NPF to Port Harcourt on orders of the IG.

Pastor David Ibiyeomie says I criminally defamed him because I posted a letter his church member sent to me alleging corruption and adultery.

Both news makers refused to answer the allegations but Ibiyeomie called me several times to threaten me with lawsuits, death from above and misfortune.

Church spokesman did the same with Danielle Ogbeche of Daily Post too. I have been charged with a cybercrime along with a Rivers state journalist who simply syndicated my story. 500 blogs did. Cybercrime? in the Nigerian constitution and remanded in prison.

Next week 23rd I appear in court again for a second bail attempt. I will be in this Port Harcourt prison till then. THE PEN IS MIGHTIER THAN THE SWORD.

#Journalism is not a crime. I love you all.

Plstrend #FreeKOO #FreeMadamHNN. @ludovicca_iacinno pls tell the world. Tweet it to the Toronto Sun's @Joe_warmington. Pls every one let Joe know. I'm in high spirits. The NPF recommended NO bail. Police is never your friend in Nigeria. I will always be a proud international investigative journalist. I will not see my phone again for a week. Off to a Nigerian prison. Mass Comm students never give up. I don't need my powerful connections. I want the law to run its course. GOD BLESS #FREETHESHEEPLE#KEMIOLUNLOYO 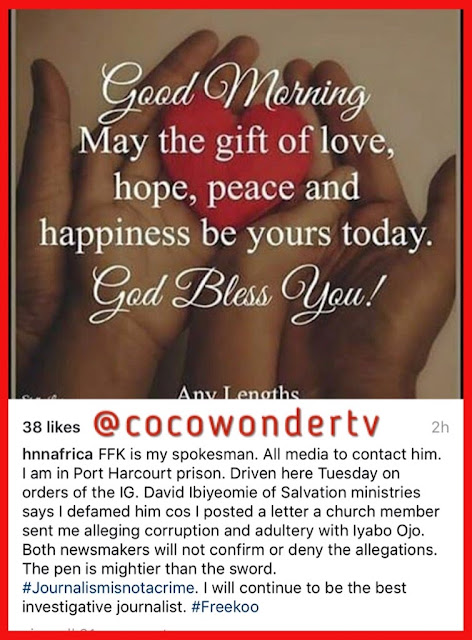 FFK is my spokesman. All media to contact him. I am in Port Harcourt prison. Driven here Tuesday on orders of the IG. David Ibiyeomie of Salvation ministries says I defamed him cos I posted a letter a church member sent me alleging corruption and adultery with Iyabo Ojo. Both newsmakers will not confirm or deny the allegations. The pen is mightier than the sword. #Journalismisnotacrime. I will continue to be the best investigative journalist. #Freekoo