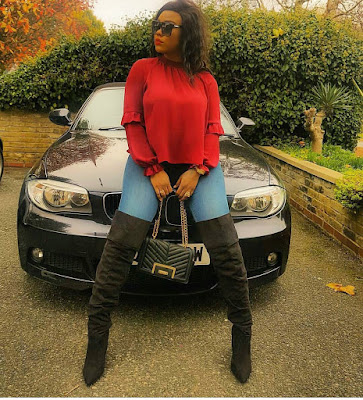 Sahara reporters has confirmed from multiple sources that the house in front of which curvy Nollywood actress Daniella Okeke last year showcased on Instagram a Mercedes-Benz GL450 was, like the car, purchased for her by the controversial pastor.

After buying it for N40m, the controversial ‘Man of God’ then spruced it up with N120million before handing it over to Ms. Okeke, who is one of the women romantically linked with him. 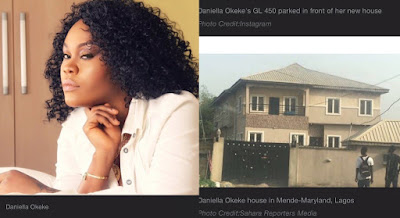 The property, which has two duplexes, is located on Alabi Street, off Okey Okeke Drive in Arowojobe Estate in the Mende-Maryland area of Lagos.  It was initially owned by fashion designer Adedayo David Eweje, who owns fashion company “David Wej.” 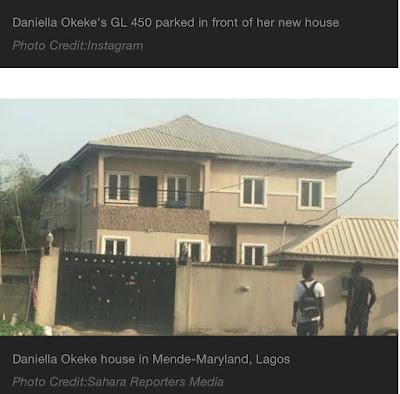 Sahara reporters reached out to Mr. Eweje who admitted selling the duplex before 2013 but claimed he didn’t know to whom the house was sold or who the present occupant is.
He said the transaction was handled by his lawyers, who are also in possession of the paperwork.
Our sources, however, insisted Mr. Eweje was definitely aware that the front duplex was purchased by Apostle Suleman, as they did meet several times before the deal was completed. 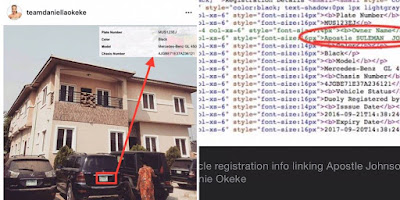 Our reporters visited the house yesterday but attempt to speak with the occupants were unfruitful as no one answered the door.  When we attempted to get back in there early today, security at the entrance of the estate had been beefed up significantly, obviously to ward off media interest in the area. Security men stationed at the gate of the Arowojobe Estate location of the house said the only way to gain access is to get the occupant to fetch you from the gate. 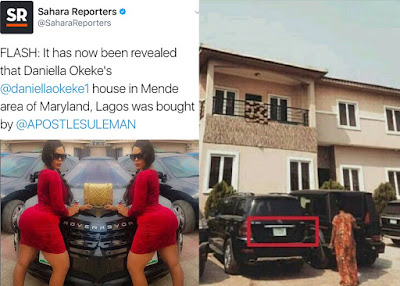 Sahara Reporters revealed yesterday that the Mercedes-Benz car displayed by the actress was registered to Apostle Suleman.  Shortly after we revealed that a Lagos State Motor Vehicle Registry had inadvertently revealed that Suleman registered the vehicle, the state-owned website curiously tried to scrub Apostle Suleman’s name off the website as the owner, but the original story was retrieved through a web archive search, which clearly maintained the ownership record of the car. 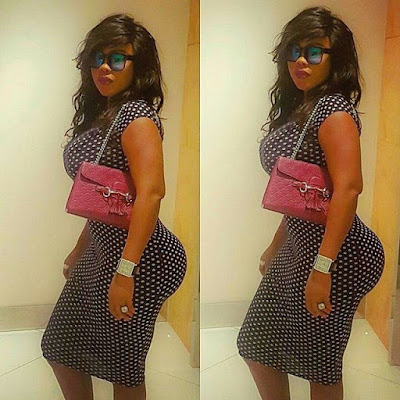 Following the latest revelations in the public domain, Apostle Suleman has declared that he is taking the battle of his exposed infidelity to a “spiritual” realm.
In a statement through Phrank Shuaibu, his spokesperson, the pastor asked members of his church to desist from engaging in a media war.  This ceasefire is in stark difference to a fiery message he gave last Friday asking his followers to unfriend anyone on Facebook who might have a negative opinion about him.  At that time, he also urged his church management to remove from its employment anyone caught sharing on social media any stories about his sex scandals.
Sahara reporters learnt that Apostle Suleman left Nigeria last night for Washington DC where he is billed to address a crusade for three days. 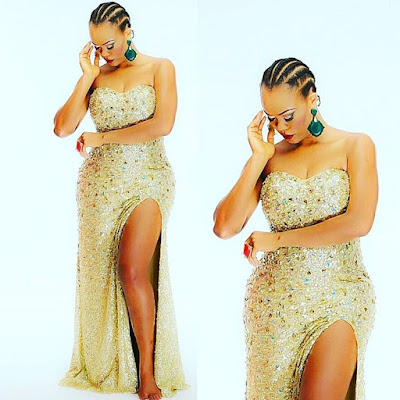 The Suleman sex scandal became public two weeks ago when he colluded with some federal police officers to arrest a Canadian-based musician, Stephanie Otobo, with whom he had a romantic relationship.  As soon as Sahara reporters broke this story, the police hurriedly filed terrorism and blackmail charges against Ms. Otobo, entangling her in a protracted legal imbroglio that stalled her bail from prison for three days. 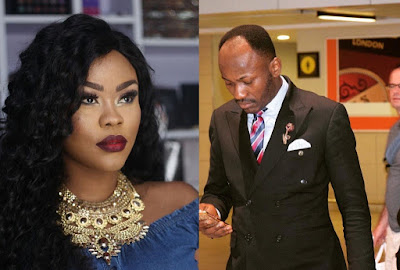 When she regained freedom, Ms. Otobo took the time to explain in detail her sexual encounters with Apostle Suleman, detailing how the controversial pastor funded her lifestyle, including flying her to the United States, Europe, and Nigeria for sex, and promised to marry her.