Nigerian Bishops under the banner, Niger Delta Bishops and Ministers Forum (NDBMF), have warned the Canada-based self-professed stripper, Ms. Stephanie Otobo to retrace her steps from her allegations against Apostle Suleman or face the wrath of God. 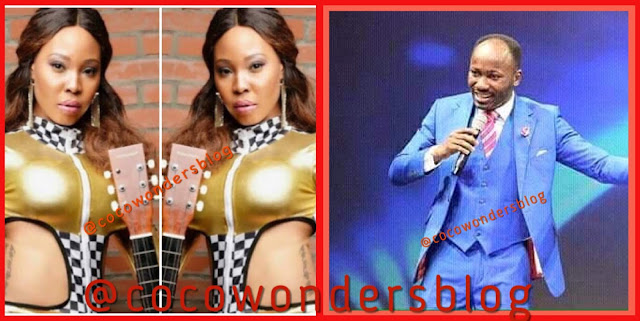 Recall that Ms. Otobo had accused the General Overseer of Omega Fire Ministries, Apostle Johnson Suleman of ditching her after allegedly promising her marriage in an amorous relationship she claimed equally got her pregnant.


According to Vanguard, president of NDBMF, His Eminence, Dr. Julius Ediwe, who spoke to newsmen in Port Harcourt said the allegations of Ms. Otobo against Apostle Suleman is pure falsehood. Stephanie Otobo and Apostle Joshua Suleiman

“We want to let Nigerians and the whole world know that this is propaganda. It is false. As spiritual fathers in the land, we will not be quiet and watch a young girl with whoever that is sponsoring her, spoil the name of a man of God.

A man of God who has single-handedly stood in defense of Christians in this country, Africa and the whole world.”

“We cannot sit down and watch a young girl like that speak blasphemy of such a man of God. We are here to say it is an error. As Niger Delta Bishops and Ministers Forum, we condemn the actions of the young girl and whoever that is sponsoring her.” “We want to advise them to leave Apostle Suleiman alone; allow him to do what God has sent him to do in Nigeria, in Africa and the whole world.

God called him to preach the gospel and we are enjoying the gospel and we love what he is doing. I want to let Nigerians know that Apostle Suleiman has made us, clergymen proud in this country. Such a man is not somebody who that little girl should come up to rubbish.” “So, we are saying, please, if you love your life, run away from this evil paid for against the man of God. If not, the wrath of God is coming upon you! We know that such allegation can come at any time to any man of God who preached the truth and has integrity.” “

We want to urge Nigerians not to buy into what that young girl is saying. Anybody that is following the girl should be careful, because they are incurring the wrath of God. Remember, the Bible said, touch not my anointed and do my prophet no harm. God has not permitted anybody to speak such evil of any man of God. We are warning whoever is involved in this to be careful with men of God.”

she had equally engaged the services of a lawyer, Keyamo to press charges of N500 million naira against Apostle Suleman.